NHS to create 10 new healthy towns – is one being built near you?

The new communities in England will be used to test ideas for reducing obesity, including having fast-food free zones near schools and green spaces. 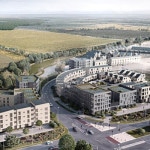 NHS England said the developments will be focused on “healthy living” and will provide more than 76,000 homes across England.

The communities will also provide care and support for dementia sufferers.

The communities will also provide care and support for dementia sufferers.
Clinicians, designers and technology experts will work together to create the new healthy towns.
The money to build the developments will come from council budgets and private partners rather than from the NHS.
The places earmarked to test the healthy living scheme include existing villages in the South West, London and the North West and two new developments in Cambridgeshire and Darlington.
Some developments are already being built, while others will not be completed until 2030.
One of the developments in northwest Bicester, Oxfordshire, will have 6,000 zero-carbon homes and cycle networks to promote exercise.
Ebbsfleet Garden City in Kent will provide up to 15,000 homes in the first garden city for 100 years, while Cranbrook, Devon, will have 8,000 homes with healthy lifestyles taught to pupils in schools.
A community with more than 3,000 homes in Whitehill and Bordon, Hampshire, will be “care ready” to help people who have long-term conditions.
Simon Stevens, the head of NHS England, said: “The much-needed push to kick-start affordable housing across England creates a golden opportunity for the NHS to help promote health and keep people independent.
“As these new neighborhoods and towns are built, we’ll kick ourselves if in ten years time we look back having missed the opportunity to ‘design out’ the obesogenic environment, and ‘design in’ health and wellbeing.
“We want children to have places where they want to play with friends and can safely walk or cycle to school – rather than just exercising their fingers on video games.”
Professor Kevin Fenton, national director for health and wellbeing at Public Health England, said: “Some of the UK’s most pressing health challenges – such as obesity, mental health issues, physical inactivity and the needs of an ageing population – can all be influenced by the quality of our built and natural environment.
“The considerate design of spaces and places is critical to promote good health. This innovative program will inform our thinking and planning of everyday environments to improve health for generations to come.”