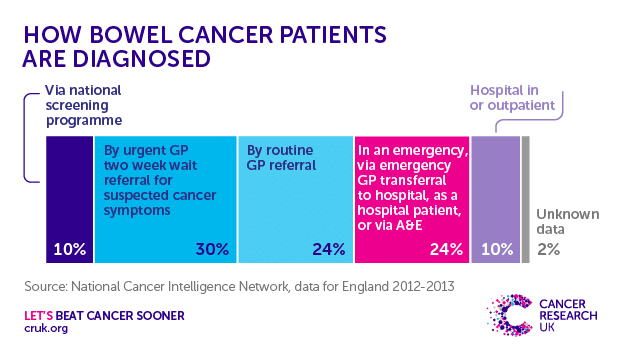 Bowel cancer is more likely to be diagnosed at the earliest stage if it is picked up by screening, according to new figures released by Cancer Research UK and Public Health England’s National Cancer Intelligence Network on Friday.

“Early diagnosis means better survival and late diagnosis is bad news for patients, so we need to learn how to avoid it. This new information really helps us understand the best ways to diagnose cancer and where the health service should target resources.” – Sara Hiom, Cancer Research UK

For the first time, data shows the stage (one to four) at which cancer is detected by the different routes to diagnosis – through screening, by a GP referral, or as an emergency.

Of the cases picked up by bowel screening (where the stage at diagnosis was known), more than one third (37 per cent) were caught at the earliest stage (stage one) while fewer than one in ten (8 per cent) were advanced (stage four).

Patients whose cancers are picked up at an earlier stage almost always have better chances of survival because treatment is more likely to be effective than it is for those diagnosed at a later stage.

Sara Hiom, Cancer Research UK’s director of early diagnosis, said: “For the first time we’re able to see specifically how advanced or how early cancers are when they are diagnosed via different routes within the health system.

“Early diagnosis means better survival and late diagnosis is bad news for patients, so we need to learn how to avoid it. This new information really helps us understand the best ways to diagnose cancer and where the health service should target resources.

“Bowel cancer in particular has a lot of room for improvement, so it’s great news that there’s a recommendation to use a new updated bowel cancer screening test called FIT. We know this is an easier test for people to use at home and that both men and women are more likely to use it, so it’s vital this is rolled out as quickly as possible across England. It’s also important that people go to their doctor if they notice symptoms such as blood in their poo or a change in their normal bowel habit such as looser poo, pooing more often or constipation, even if they’ve recently had a bowel screening test.”

Of the cancer types included in analysis, screening is available for breast cancer for women and bowel cancer for men and women.

Dr Anne Mackie, Director of Screening at Public Health England, said: “This new research on the stage at which people are diagnosed suggests that screening has an important part to play in achieving earlier diagnosis of bowel cancer. Everyone aged 60 to 74 in England receives an invitation to be screened along with some information to help them decide.”

Of those patients diagnosed following a GP referral, just over a third (34 per cent) were stage one compared to just over a fifth (22 per cent) at stage four.

More than half (58 per cent) of all cancers diagnosed as an emergency were diagnosed at stage four compared to around a tenth (11 per cent) at stage one.